L&G, alongside asset managers Wrenbridge, have pumped £28.5 million into redeveloping the city’s now 500,000sq ft shopping centre The Grafton, which they saw as a location long overdue for re-development

Some of the first hard evidence of civilization in what is now the city of Cambridge dates back to the first century BC, some 3500 years ago.

Its iconic university, relatively new in comparison at just 810 years old, along with countless archaeological discoveries have earned the city a reputation for being one of the UK’s most significant historical sites.

However, it is also a deeply modern city playing host to the UK’s version of Silicon Valley, Silicon Fen, one of Europe’s most important centres of technological development.

This dichotomy within Cambridge’s identity has had a profound influence on the city’s retail sector. On the one hand it has made positioning any tenant mix a complicated consideration given the rich diversity of inhabitants, but it has also in recent years driven its population growth and given retailers access to one of the most affluent local markets in the country.

L&G, alongside asset managers Wrenbridge, have pumped £28.5 million into redeveloping the city’s now 500,000sq ft shopping centre The Grafton, which they saw as a location long overdue for re-development.

After two years in development, the final phase three of the centre’s development is all but finished and it has just announced that River Island will open in a newly reconfigured 9,110 sq ft anchor unit, ahead of the introduction of a 17,500sq ft Pure Gym due by the end of the year.

This marks the culmination of a lengthy project to breathe life back into the centre, starved of investment for more than a decade despite both the size and relative wealth of its catchment area ballooning.

“The Grafton was a pretty unloved scheme, so it had absolutely no capital investment for 10-15 years,” Williams added.

Though its previous owners always planned to develop the shopping centre, wider issues like the recession and a new local upmarket shopping centre The Grand Arcade hampered investment, leaving it in much the same state as it had been since being built in the 1980s.

Spotting the low hanging fruit, L&G and Wrenbridge took control of the centre in 2015, stating that their immediate goal was to push forward the development.

According to Wrenbridge’s associate director James Feltham “there was always a commitment, at purchase to do the refurbishment.

“That was a real key of the business plan was to go in, get on with the work. A lot of works and a lot of elements have been promised previously and not always happened for various reasons so what was important was that a statement was made day one.

“We are delivering a refurbishment at a time when there has been a real accelerated change in retail market and I think that has allowed us to try to adapt to that as best as we can, from my perspective.”

A key part of that adaption was how to position the newly developed centre as part of the city, striking a mix between the deeply historical and the fiercely modern elements.

In essence, this was achieved by updating the centre rather than overhauling it entirely. The key original structural elements of the site remain largely unchanged, but the look and feel of the centre, along with its tenants, has been brought up to date with modern retail.

Williams explained that shortly after taking on the site, meetings were held between all the parties involved including retailers, architects and agents to establish exactly what shape the project needed to take.

“A lot of the feedback that we have had from day one was ‘oh God it’s another landlord who’s just going to come along and change what The Grafton is about, they’re just going to make it up-market, it’s just going to be another arcade with designer brands,” he said.

“We have tried to do things different so when you walk in you don’t just feel like it’s a mass high street line up.”

While championing independent retailers, The Grafton has also been positioned as an “everyday” shopping centre, with its brands representing a more casual and less up-market range of goods than its local rival The Grand Arcade.

One of the key elements for us was to make the Grafton an everyday shop for Cambridge. We’ve got a really broad demographic, from young kids to the families,” he added.

“Anglia Ruskin University is on our doorstep, that’s very much a city centre campus so they’re another key target audience for us, we’ve got a really nice wide profile.”

“A lot of retailers right now as you would expect are very cash conscious. There’s examples of retailers who have been trading in both The Grafton and in The Grand Arcade who are coming to the end of their lease in the latter and are now thinking ‘we need to be more cost sensitive than we are’ and have reached out to us to extend their lease.”

The update has not only seen the likes of H&M and River Island dramatically upsize their footprints at the centre, but has drawn in new retailers like Decathlon and The Entertainer.

Feltham believes that after a period of apathy for many retailers to get involved in the centre, the new investment and repositioning of the centre has driven confidence among its current and prospective tenants.

“A lot of thought process is going into what the retail centre of the next ten years will look like. Trying to make it something people feel excited by.”

Much like the surrounding city, The Grafton has embraced its heritage and has been moulded, instead of rebuilt, into a modern and forward-looking entity.

With its latest retail additions and owners’ flexible attitude towards its tenants, The Grafton is poised to become a vital part of Cambridge’s ongoing growth as one of the UK’s most vital cities. 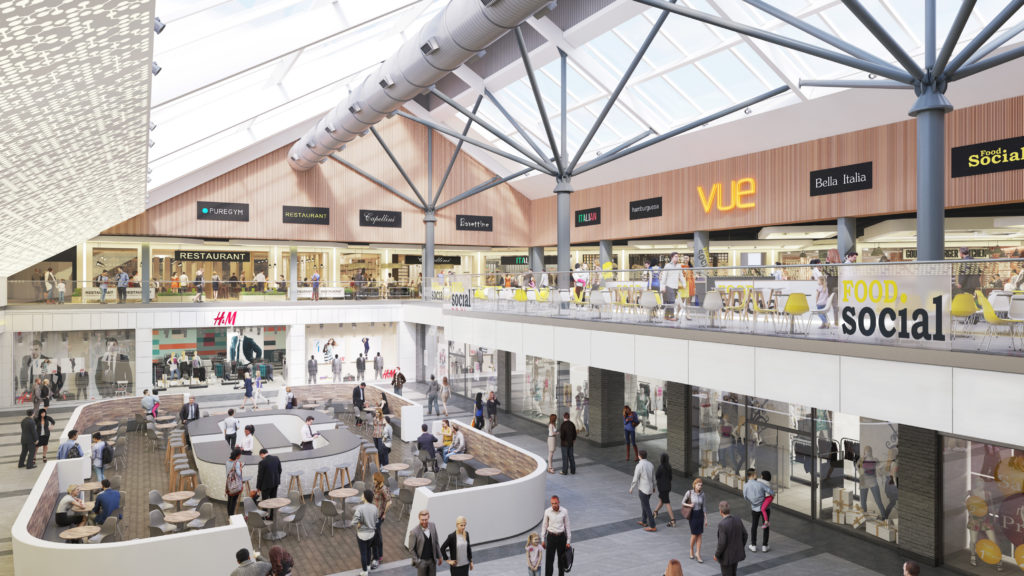